The People’s Bank of Govanhill was intiated by artist Ailie Rutherford during a residency at Govanhill Baths in 2015. What began as a series of currency experiments, ad-hoc exchanges and on-the-street discussions has grown into a long term collaborative project, mapping the local economy and expanding ideas of community currency to re-define our ideas of value, worth and distribution.

In 2017 The People’s Bank of Govanhill became a constituted community group, run collectively by a committee of women with a growing membership of local residents and interested citizens.

The appropriation and re-interpretation of feminist economists JK Gibson-Graham’s “Economy as an Iceberg” diagram (from their book Take Back the Economy) has provided a useful metaphor in discussing Govanhill’s alternative economy and the everyday economic practices supporting our lives that often go unacknowledged. 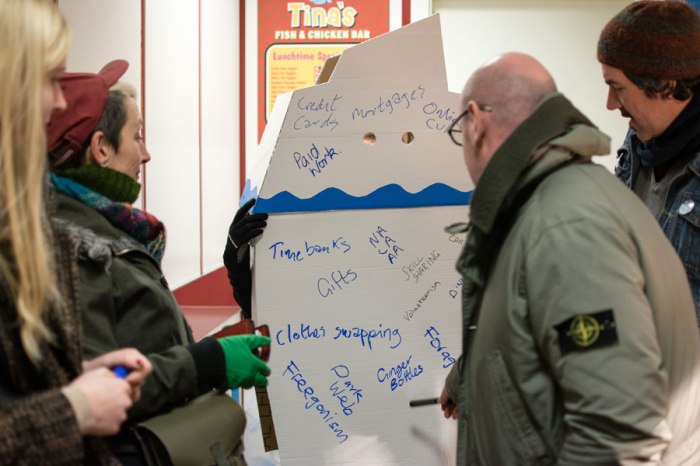 Our new exchange space, Swap Market opened in September 2018 transforming a former pawn shop into a space for swapping and sharing resources without the need for money. Swap Market works as a skills and knowledge exchange, workshop space as well as facilitating the exchange of goods, traditions and cultures; a place to work together to find innovative solutions to everyday problems, putting feminist economics into practice. We work a different kind of stock exchange with our in-store “Swaps and Shares index”. Rather than the financial growth charted by the traditional stock market, we chart the growth of sharing in the local area. For more information on Swap Market visit swapmarket.info

The People’s Bank of Govanhill is now looking at how we might incorporate digital technologies into this project. If we are inevitably moving towards a cashless society where machines and technology have an increased impact on our lives, we want to know how can we do this in a way that empowers people, enables us to share resources across networks, and meet our needs rather than allowing technology to further disempower people and exasperates inequality.

The People’s Bank of Govanhill is now a Community Interest Company under the name Feminist Exchange Network CIC. Our current board members are:

For for more information, to join our board of directors or become an associate member email us at peoplesbankofgovanhill@riseup.net